Saturday 9: Back in the USA

I'm beginning this July 4th weekend by picking up one of my former clients and spending the morning with her at a local berry farm. They have a market, bakery, food stand, and a winery. She likes her wine so she is very excited. We are going this morning because it's going to get HOT as the day goes on.

Before I head out, I do want to join in the fun at Saturday 9. Thanks, Sam, for another great song and interesting questions! 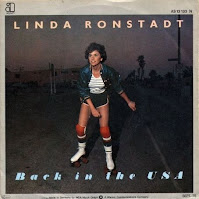 Unfamiliar with this week's song? Hear it here.
From the archives, with some tweaks

1) This song lists seven cities -- New York, Los Angeles, Detroit, Chicago, Chattanooga, Baton Rouge and St. Louis -- that Linda just loves. How many have you visited?  Chattanooga is the only one I've set foot in.

2) The lyrics refer to hamburgers sizzling on the grill. What toppings do you believe make a perfect burger?  Doing it myself at home, I like it simple with just cheese, lettuce, tomato, and ketchup. If I'm having a burger out at a restaurant I love a good whiskey barbecue sauce, bacon or mushrooms, and onion straws.

3) The original recording of this song by Chuck Berry has always been one of Linda Ronstadt's favorites, one she used to enjoy singing along with in the car. What's the most recent song you sang?  Row, row, row your boat. I was singing with my granddaughter (the kiddos are the only ones I ever sing in front of).

4) Linda performed The National Anthem at Game 3 of the 1977 World Series. The New York Yankees won both that game and the series. How is your baseball team doing this season?  The Pittsburgh Pirates are the closest team, but I don't follow baseball so I have no idea at all how they are doing.
5) On the sleeve for this record, Linda was photographed on roller skates. Emergency rooms report a spike in wrist injuries, with people falling off skates and skateboards and jamming their wrists catching softballs. Have you recently been to the Emergency Room or Urgent Care?  No. I've been blessed with good health and no less than graceful moments.
6) It's July, so summer is in full swing. Bug bites are a big summer annoyance. Are you itching and scratching this morning?  No. I was last night but that's because I was picking tomatoes. Tomato plants have always made me itch like crazy and it finally makes sense since I recently learned they are in the same family as Nightshade.

Since this is our last Saturday 9 before Independence Day, let's ask some questions related to the holiday.
6) The Pennsylvania Evening Post was the first newspaper to print the Declaration of Independence. What's the most recent printed media you have read (newspaper, magazine, newsletter, etc.)?  A newspaper, but only because my mom gave us a copy the other day. Our local newspapers have so little in them that we stopped getting them a few years ago. It makes me sad. I miss lounging around with a giant Sunday paper.

7) In high school, Sam was crazy about American history and got good grades. Science was her worst subject. In high school, where did you shine? In what subject were your grades not so hot?  I did well in all of my subjects, but I was weaker in math than the others. English (anything to do with reading or writing) and history were my absolute best subjects.

8) The first 4th of July parade each year is held at 12:01 AM in Gatlinberg, TN. Will you attend a parade or fireworks to celebrate the 4th?  No. I considered taking the grandchildren to our town's parade, which is very nice and quite long, but it's supposed to be 90 degrees and there is very little shade along the route. I decided that didn't sound very appealing. Our daughter and s-i-l want to take them to the fireworks in the evening. Tim and I will probably watch from home. We can see the highest ones from here...and we always have a lot of neighbors setting off their own.

9) Americans love to celebrate our independence. In fact, there are more than 30 towns all across the US called Independence. There are two in MN alone (one outside Duluth, the other west of Minneapolis). Please google it and let us know: does your state have an Independence?  Apparently not. There is an Independence Township, but no town that I can see. 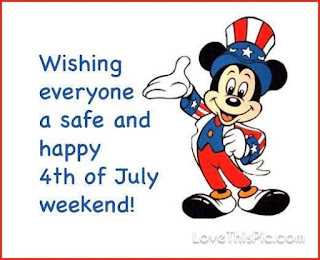 Email ThisBlogThis!Share to TwitterShare to FacebookShare to Pinterest
Labels: Saturday 9