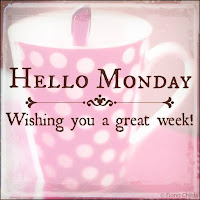 I'm celebrating it's my birthday today! It's also my mom's birthday. What a present she got 58 years ago! Ha, ha! So far I have spent the time since I got up responding to texts and messages on Facebook wishing me a happy birthday...and that includes many of you, my dear friends. Thank you for thinking of me and blessing me with your prayers and wishes!
The weather is blessing me with a rainy day and a predicted high temperature of 70 degrees! In the middle of August! The last couple of days have felt more like fall than summer, but this seems to be the pattern we've moved into as the climate changes. It will get hot again and usually that heat will hang on through September and possibly into October. It's all good. Fall is my favorite time of year so I'm loving the cooler temps, the smells, and the sounds.
I'm feeling happy and blessed, of course. Not really any older. That's good, right? And content. Daisy is curled up against one side of me and Jasper is snuggled up on the other.
I'm thankful for a good weekend. Tim didn't work on Saturday so we decided to spend the morning out doing whatever I wanted for my birthday. I chose to go to the farmers market in Ligonier. It was the first time we'd been there in several years. It is a bit smaller than it used to be, but still a nice market. We didn't purchase any produce, meat, or crafts...prices are very high. We did purchase 2 bottles of wine, nice, light, fruity ones.
Oh, we saw these pine (or are they fir) trees planted all around the parking area. We really liked them. They are pretty and the needles are soft, not jaggy. Does anyone know what kind of tree they are? 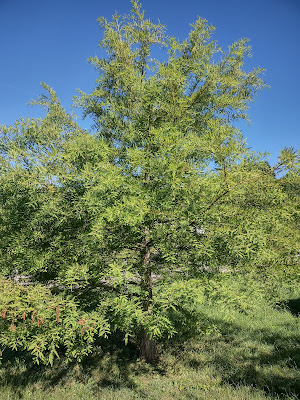 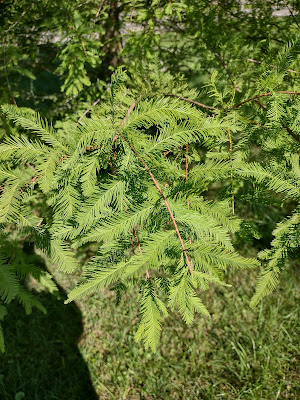 From there we drove up the mountain to the Mennonite market in Stoystown. Tim wanted some corn and what I had gotten there was the best we'd had in ages. We came home with a dozen ears of corn, a huge watermelon (Tim's favorite fruit), a cantaloupe, some cucumbers and from the regular store we got my favorite pepperoni rolls, a couple of bags of Martin's barbecue potato chips (the best ever!) and some green gummy frogs for the kids.
We stopped back in Ligonier on the way down the mountain and had lunch at Fat Daddy's. Tim had a crock of his favorite French onion soup, I ordered some fried zucchini, and we shared the best pizza we've had in years. It was a little pricey, though, so we probably won't make it a habit.
The kids came over when we got home to give Megan a break. They had been being real stinkers for her when she was trying to get her shopping done and she had called me in tears while we were out asking me to give them a talking to on speaker phone.
Sunday we had the kids all day because that is the day Megan works daylight and Cody had a union meeting in the morning and then needed to sleep so he could work last night. We mostly just hung out in the house because it was a day much like today.
I did make a Walmart run in the morning. I needed to pick up Tim's new cholesterol medication and I bought an anti-fungal for Leah because in addition to all the big red bug bites (she is apparently sensitive to bites and they all get huge and bright red) we think she has ringworm. Not a big deal, but you do want to get on it and clear it up. I also got both Colton and Leah a smaller kinetic sand treasure chest. Best money spent! Each one comes with 4 treasures, a special digging tool, and a key for the chest as well as enough kinetic sand to fill the chest. I gave them each a "diamond" and a "pearl" to add to their treasure and they had so much fun digging up treasure and reburying it over and over. Pappy made pancakes and bacon for breakfast and later we had hotdogs and corn-on-the-cob. It was a happy day.
I'm feeling happy, content, and blessed. As far as lingering Covid symptoms, I still have trouble with the cough. It has gotten a good bit better than it was, but it just will not go completely away.
Today I'm not doing anything special. I will see my mom at some point and give her a gift. Otherwise, it will be a normal day...laundry, cleaning, some reading, and I want to figure out how to install the printer I bought new in the box at a garage sale last summer. It was a backup and since my other printer has quit working, I guess it's time.
Happy Monday! Have a blessed and wonderful week!
at August 15, 2022