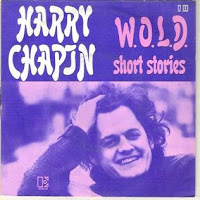 W.O.L.D. (1973)
Unfamiliar with this week's tune? Hear it here.
1) This song tells the story of a man who has made a career in radio.  How many professions have you worked in?  I don't know if I'd call them professions, but I've had jobs in 6 different fields of employment. Finisher in a foam rubber plant; office assistant in a grocery store; retail sales; bus driver; activities assistant in a nursing home; and companion to developmentally disabled adults.
2) He describes himself as "45 going on 15." This morning, do you feel older or younger than your years?  The mind ALWAYS feels much younger than my years. The body...not so much.
3) He estimates that he's traveled thousands of miles, from town to city, as disc jockey at various stations. Have you ever relocated for a job?  We've relocated twice for Tim's work.
4) This song is written as though he's reached out to an ex. Is there someone from your past who is on your mind this morning?  Not really.
5) Tell us about a radio personality you grew up listening to.  Casey Kasem is the only one I really remember all that well even though I listened to the radio all the time. Well, I also remember a local DJ on (at the time) Pittsburgh's biggest station, AM or FM, KDKA. That was Jack Bogut. I didn't listen to him on my own, but heard him all the time in the car with my parents. I also met him and snarled the line on his personal fishing pole into a huge knot. That probably contributes to why I remember him so well.
6) This week's featured artist, Harry Chapin, was an Oscar nominee. Before he became a musician, he wrote and directed a documentary about boxing called Legendary Champions. When you sit down to watch a movie, would you prefer action, comedy, drama, fantasy, horror, mystery, romance, thriller or documentary?  It depends on my mood, but generally I will choose a romantic comedy, a comedy, or something in the action/adventure genre. I do watch the others, just not as much.
7) Today Harry Chapin is fondly remembered for his philanthropy. He filled his calendar with benefit concerts that supported local food banks all around the country. How would you like to be remembered?  As a nice person who loved the Lord, tried to be kind, do good for others, and leave the world a little better.
8) In 1973, when this song was popular, one of the top-selling toys was a Curious George book packaged with a plush Curious George. Can you recall a favorite book from your childhood?  Misty of Chincoteague, The Big Tidy Up, and in my very early years, Dr. Goat.

9) Random question: Here's $100. What will you spend it on?  Tim and I are going to the outdoor market in the next town over this morning and then on to a couple of wineries for my birthday outing, even though my birthday isn't until Monday. I'd put the money toward a fun day.

Thanks to Sam at the Saturday 9 for the music and questions!

Email ThisBlogThis!Share to TwitterShare to FacebookShare to Pinterest
Labels: Saturday 9