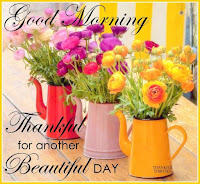 Good morning! It's the last Thursday of summer around here. Yes, I know it's not the end of summer according to the calendar, but the kiddos head off to school next week and that is always marks a mental shift for me...admittedly, the shift isn't as jarring as it was when I drove a school bus and it also meant back to school for me.

Anywhooo...I'm linking up with Jen today for Thankful Thursday. I'm thankful she's carrying on while our friend Rebecca Jo deals with her painful shoulder and covers for a coworker.

This week I am thankful...

** Mom, Megan, and I are getting everything pulled together for a garage sale this Friday and Saturday. I had been wondering if we would. Megan finally hauled a LOT of stuff up to Mom's garage and priced it yesterday. We can barely get in there at the moment, but that's because we had to put all the big things and all of Tim's tools on the ground until tomorrow when we can pull them outside and put things on tables there as well as inside. 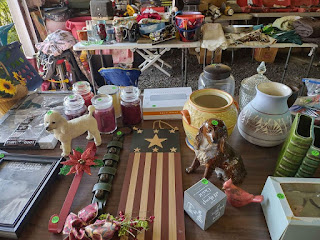 I made a video and shared it to Facebook yesterday and also posted several photos on Marketplace and the groups I belong to there. So, as someone pointed out, if we are Facebook friends you can hear my voice. 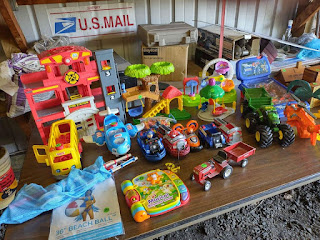 All that free publicity paid off. I've had a lot of contact and several items have sold already! Two men are coming tonight for tools. 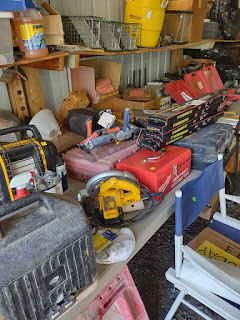 ** My church's back to school bash last Saturday was hugely successful and the rain held off. We were able to hold it on the grounds of a local elementary school and made contact with at least 80 kids and 40 adults. Around 100 Bibles were given out...a preschool version, a comic book version for older kids drawn by a Marvel Comics illustrator, and adult versions. We gave them free school supplies, fed them, played games, and had music, a competition jump rope team doing demonstrations and giving free jump ropes, and a firetruck the kids could check out.

** The school district gave the okay the day before the back to school bash for the church to begin holding and after-school "Good News" club at the school! We already offer tutoring at the church during the school year and with the bash...I guess they finally decided to open the doors to us.

** I have an interview next Wednesday for a part-time job as a Desk Assistant in our local library system. The hours would encompass Monday afternoon and evening, Tuesday afternoon and evening, and Saturdays. I'm not sure pays much, but it would be a fun job and if it doesn't pay enough, I could work and still keep looking for something else. So, keep that in your prayers, please?

** Leah gets to go to pre-school. Up until Tuesday we were afraid she might not. Colton had gone through the county's Head Start program. Megan and Cody were over the income limit, but after a wait, Colt was able to go when a spot opened up.

Last year they told Megan there would be no problem with Leah going because they had 40 spots open and few registrations. That apparently changed over the summer and a few weeks ago they told Megan Leah would have to be on a waiting list. Thankfully, a spot opened up this week. We don't know what day she starts yet, but she is so very excited about going. 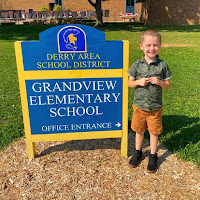 Colt had his kindergarten orientation last night. I guess it was rough at first. He is so shy and has such awful anxiety in new situations and it did not go well when they got there and right off the bat separated him from his parents. It took Megan and the guidance counselor a while to calm him down and then once he saw a couple of friends he remembered from last year he was fine.

Oh, how I pray for these kids. School was not a positive experience for Megan or Cody and I hope that doesn't transfer over to them.

** We've been enjoying cooler than normal, though wet, weather this week. It is beginning to warm up a bit...85 degrees today...but still comfortable and the nights are cooler.

We've decided we're going to have to look into a heater for the pool next year. No one has been in it since the very beginning of the month. The water temperature is down to about 70 degrees. That's blue lips and teeth chattering water! Doable if the days are really hot, but they haven't been.

** Megan has been pretty upset over a situation at work, but everything seems to be calming down and she is going to stay for now. I'm afraid of how things will go once the kids are in school because she won't see much of them through the week. I remember those days of being torn between work and home. It's hard to be a working mom and in this economy, Megan doesn't really have a choice. But I am glad the situation seems to have passed and she isn't miserable over it, anymore.

** The sunshine that makes the dew-covered spiderweb outside the kitchen window sparkle like it's spun from diamonds.

** The chubby gray squirrels chasing each other around and up and back down the big Poplar tree outside my office window.

** Jasper is cuddlier since my mom's dog stayed with us last weekend and he hid from her the whole 4 days. I think he missed me. Ha! Here he is helping me at my desk. 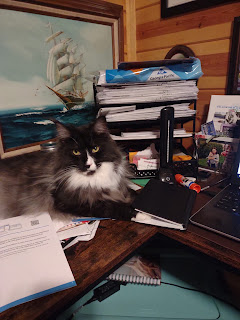 ** For neighbors I've known all my life.

** For the season of pumpkin-spice flavored everything! I bought pumpkin bread and pumpkin spice English muffins yesterday.

** For my husband and all of my family.

** For all of you, my online friends.

** For God's love, grace, and fresh mercy each day.

Happy 1st day of December!   Is it just me or has this year flown by? And now here we are at the start of the Christmas season so things wil...