My Weekend & My Auction Wins

This first weekend of fall has been a wonderful one filled with family time. The weather was not bad. It was cool...okay...it was cold yesterday morning, but it was sunny and it did warm up. Today was warmer, but it has rained much of the day.

I was up early on Saturday and bundled up to go with my mom and step-father to an auction. The items being sold were much of the art and some of the antiques and collectibles from the estate of a man my parents had known since the 1970's. We knew he was a collector, but Saturday's sale was to move enough things out of the home to have another auction next Saturday. The auctioneer said there was nothing but a path through the house. So, technically, I suppose he was a hoarder, but he hoarded very high end things.

So many paintings and prints (most signed and numbered). Some, even though they were by very well known artists, went for very affordable prices, on the cheap side, actually. The paintings were a different story. They were large and in absolutely incredible frames...museum quality. Some of those sold for thousands of dollars. 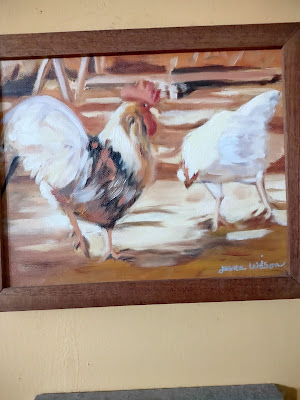 This small original Currier & Ives print. The auctioneer didn't mention it was Currier & Ives or it would have sold for much more than the $4 I paid for it. 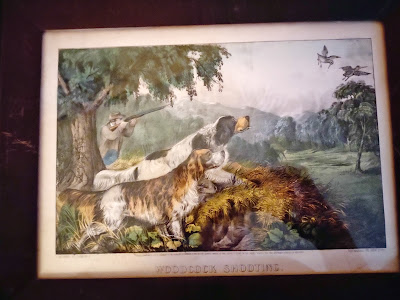 The most expensive things I bought were two large, beautifully framed Audubon prints. One of Blue Jays and one of owls. It was actually a collection of 8 prints and I had the winning bid. I was able to choose which ones I wanted or take them all (the bid price was per piece). They were lovely, but I have no where to put that many large prints. I'm going to have to do some rearranging to accommodate the two I did get. 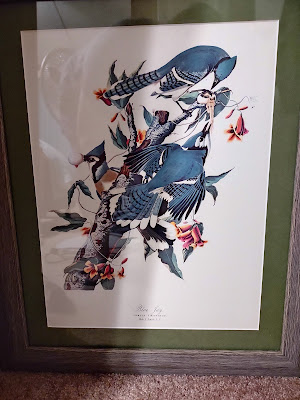 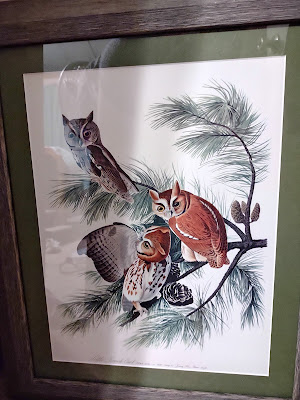 Saturday evening we took our daughter and son-in-law (and the grands) out to their favorite Mexican restaurant to celebrate their 5th wedding anniversary, which was on Friday. After dinner the grands rode home with us and spent the night. 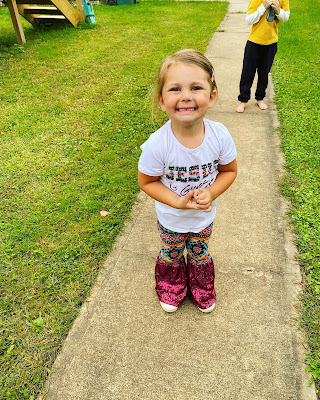 Today I woke up long before everyone else, but had a headache and felt achy. I felt kind of yucky all day, but I think it's just allergies or sinus issues due to the change in the weather. I was supposed to staff the church nursery today, but called off for that. I really didn't feel up to it and just in case it was something more serious I didn't want to expose the babies.

Pappy made the kiddos their usual Sunday morning pancakes and played games with them while I stood under a hot shower (hoping to feel better). In the afternoon we went to Sam's Club to look around. We got a few things we needed and I picked up a couple of little items for Christmas gifts.

I had an "episode" while we were there. It's not unusual for me to get what I suspect is low blood sugar when I am out shopping. I get a weird jittery on the inside feeling and my hands will visibly shake. I know if I eat or drink something it will go away. It's been happening on and off since I was in my 20's. I have been tested many times and my sugar is always fine. Today was the worst it's ever been. I had all the usual symptoms, but also broke out in a cold sweat and felt like I was going to pass out. I left Tim in line to checkout and went to get something to eat at the snack bar, but it took a while to feel better.

Once we got home and got our Sam's Club haul put away we both just rested. Tim watched one of his crime shows and napped. I read for a while and finally fell asleep for a bit, myself. I've felt more like myself since then.

Megan and the kids were over this evening because there is some kind of problem with a pipe at their house and the tub isn't draining so the kids got their showers here. It's back to school for them tomorrow after being at the beach all last week. They are so excited to go back!

This week I have some business to take care of, I want to work on organizing a couple of spaces I haven't gotten to yet, put away the outside summer decorations and get the fall ones out, continue the job search, and our nephew from Alabama is going to be in town with his family at the end of the week.

Happy 1st day of December!   Is it just me or has this year flown by? And now here we are at the start of the Christmas season so things wil...